This incredible bike fitting software fits in the palm of your hand. The Bike Fit app is packed with so many features we will only be able to highlight a few here.

The exorbitant cost and limitation of other bike fitting motion capturing devices inspired Paul and Alfonso to develop this app. For $20 the app contains many unique features that you won’t find in other software costing literally thousands of dollars. It is so versatile and works on an iPhone or iPad. So, you can always have access to your app. 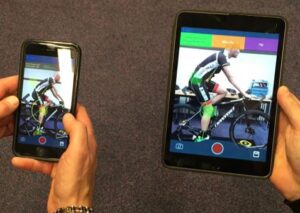 It readily displays many views and includes several unique tools. The process begins before the actual bike fit, with an emailable intake/question form (that was created for the fitter), allowing the client the ability to reply at their convenience. The amount of time spent on an In-person pre-fit interview time is reduced by as much as 90%. With the tap of a finger, you can pull up the cyclist’s information.

The Bike Fit app software even generates a post-fitting report for the client automatically. This can save a fitter over 60 minutes on a single fitting.

This is a glimpse of the fitter’s notes during a bicycle fitting. Photos, videos, and other highlighted information are included in the bicyclist’s version of the notes. 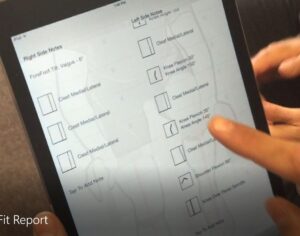 The many views of the bike fit app

The app’s user interface is similar to that of handwritten notes, making it simple to use. Here’s a glimpse at the front view of a cyclist captured with the app.

It’s the same as if a fitter were writing notes on an erasing board. 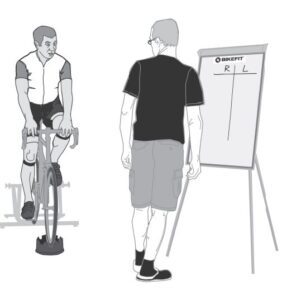 Other fitting software started at several thousand dollars and was restrictive. They often required multiple cameras, bulky apparatus, and extra space. The fitter is tied to using the system instead of focusing on the fit. Others often have to make the fitting work with the software, whereas the Bicycle Fit app flows with the fitting and supports the fitter’s process. It never gets in the way.

One unique feature is the tool used for measuring foot tilt. No other software considers the foot’s angle or tilt. 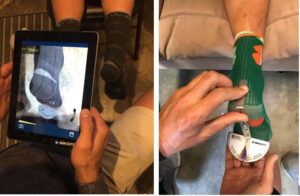 Forefoot angle with the app and forefoot tool

It’s also simple to share the view with others, including your customer. 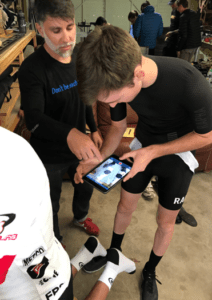 Any aspect of the fit is easy to review and share with your client. 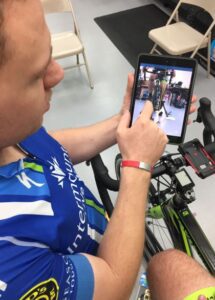 Bike Fit review on the app

Aside from the exorbitant expense of alternative bike fit software, there was less interaction with the client because fitters were typically buried behind a screen. The Bike Fit app changed that by allowing the fitter to be more involved, interactive, and demonstrate their abilities.

Alfonso’s introduction to bicycle fitting was via one of Paul’s students who performed a bicycle fitting on him. It piqued immediate interest, and next thing you know, Alfonso took a fitting class from Paul. Fast forward and Alfonso left his job at Microsoft and opened a bike fitting studio. He eventually progressed to the position of instructor.

Alfonso’s work was recognized at the time as one of the industry’s influencers under 35 years of age.