Their latest bike fit manual, “When the Foot Meets the Pedal…The foundation for Every Good Bicycle Fit” is stacked with endorsements from the top names in the cycling and clinical worlds. 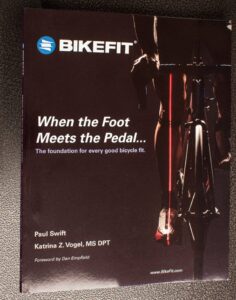 Katrina “Kit” Vogel, MS DPT, is a world-renowned bike fitter and cycling biomechanist. She was dubbed a “Rock Star” in the world of bike fitting after presenting at her first cycling conference.

Paul’s study of human function on a bicycle, combined with his product developments, has positioned him as one of the most influential people in bike fitting. After years of racing bicycles and amassing many titles, he switched gears to fitting. Having had over a 1cm leg length difference throughout his career, he took many of his adaptative solutions and began sharing them with thousands of others.

Throughout this manual, you will learn the most effective techniques and approaches in bike fitting. 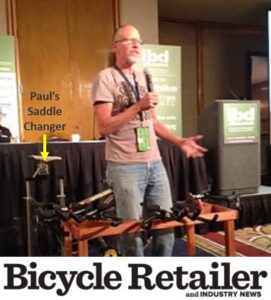 Paul Swift has led a quiet revolution in bike fit. To the chagrin of larger companies who haven’t found a way to muscle in on his turf, Paul controls the narrative on how cycling shoes mate with cleats and pedals. It is his process and products that define and execute shoe chanting, stance width and every element of a rider’s support and platform.

But Paul’s inquisitive mind does not stop with the fit and set up of products below the knee. His innovative Switchit (now called The Saddle Changer) is now a standard tooling for retailers and fitters on the leading edge of bike fit and saddle selection.

If a dozen bright thinkers worldwide are pushing the bike fit innovation, Paul is well inside that list and toward the front of it.

Dan invented the triathlon wetsuit in 1987 and the triathlon-specific racing bike in 1989 when he founded Quintana Roo, later selling to Saucony  He founded Slowtwitch.com the prominent online triathlon news and complementary website. His F.I.S.T. (Fit Institute Slow Twitch – bike fit) -based protocol of triathlon bicycle fitting is an industry methodology for fitting triathletes to their bikes. For years, Paul has taught the foot-shoe interface in many of Dan’s fitting courses. 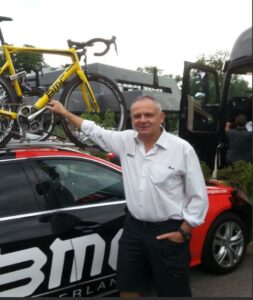 Dr Max Testa before a stage in the Tour de France

Max Testa began as a team physician 1986 with the American 7-Eleven Professional Cycling Team and continued with Motorola, MG TechnoGym, Mapei, and the BMC Racing Team as Chief Medical Director. He has participated as coach and team physician in over 30 grand tours, including Tour de France, Giro d’Italia, Tour of Spain, and prominent one day races such as World Championships for both American professional and national team cyclists. Max uses several products designed by Paul.

For more information on Dr Testa go to www.maxtestatraining.com 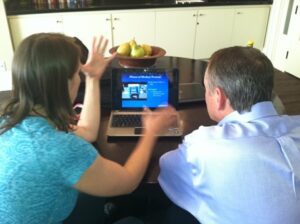 Katrina and Richard reviewing the pelvis mechanics of a cyclist

Richard is the founder and owner of The Jackson Clinics and is an expert in the field of Physical therapy, and is a highly regarded clinician-educator and researcher. He also hosts the highly regarded Richard Jackson seminars.

Richard has collaborated with Paul and Katrina bringing both to his clinics to educate his physical therapist team in the skill of bike fitting,

BikeFit illustrations, the BikeFit Manual, are registered, or unregistered trademarks, or intellectual property, of Quality Bicycle Products (QBP) and are used under license.